Azzurra Sanitari in Ceramica was established in 1985 in Civita Castellana. From the outset, Azzurra has proven itself to be a solid manufacturer, which is able to monitor the demands of a constantly changing market, responding with prompt and effective solutions for consumer needs. The current corporate structure, consisting of four families, dates back to 1991.
Today, the company comprises approximately 120 employees, with an area of around 30,000 m2 and a production output of approximately 300,000 units per year, distributed within Italy and exported worldwide: from Europe to neighbouring non-EEC countries, from Russia, to Australia, to America, to 35 countries over all continents.

In 2007, Azzurra came together with Angeletti Ruzza Design, who took on the artistic management of the company, with the aim to create a team of professionals who would change Azzurra’s image and, at the same time, expand its production. This move resulted in a new identity: Azzurra Riscopri la Purezza (Azzurra Rediscover Purity). The wide and varied range of products, with designs ranging from classic to modern by prestigious designers, make Azzurra a truly multi-faceted company. It turns simplicity into real value, not only as a design form but as a lifestyle.

As a testament to its direction taken towards increasing the quality of materials, technological innovation and communication, Azzurra has recently received major international awards:

In 2010, to ensure ongoing development and to rise to the challenge of building an environmentally sustainable future, Azzurra is undergoing the Water Saving project. With this project, Azzurra became the first company worldwide to create sanitary ware which is able to flush with quantities of water beyond belief: up to 2.7 litres compared to the standard 9 litres. Azzurra currently applies the Water Saving project to all of its collections, creating bathroom ware that flushes with only 3 litres of water. 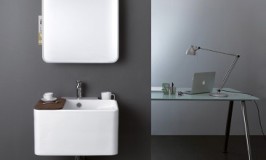 Modular system, which is multifunctional and practical-equipped with shelves and storage compartmenst, mirror and practical wheel mounted container 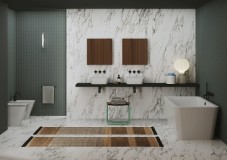 The collection is inspired by the purity of Nordic design. It is composed of floor-mounted and wall-mounted sanitary fixtures, various models of the washbasin, wc and an elegant freestanding bathtub. 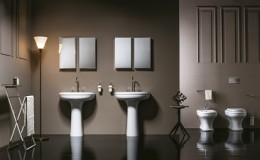 Designed by Laudani&Romanelli. Definitely far from the geometric rigour of contemporary sanitary fixtures, it is embellished by sinuous fittings, soft tapering and refined details of the bullnose edges. 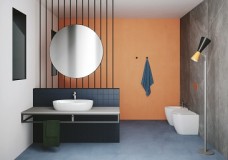 Serie inspired with comfort -Broad and generous linest. Vast selection of washbasins, available in various sizes, so as to allow multiple spatial and distribution configurations. 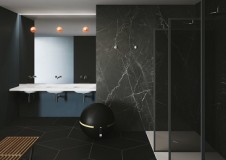 Ceramic top with integrated basin that enables the creation of made to measure solutions both in therms of size and finish. 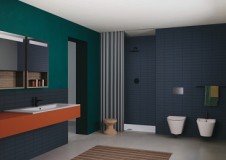 Single system, which is designed to adapt to the essential lines of contemporary bathroom furniture. There are six sizes, available with single or double basin. 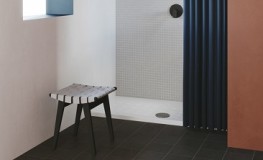 Ceramic shower tray with raised rim that, through a three dimensional graph pattern, performs the aesthetic and anti-slip function There are nine size variants for a height of 4 cm. 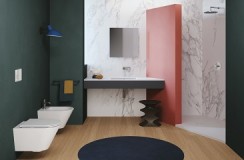 Washbasin that fully interprets the philosophy of Azzurra. Unique ceramic surface, in give formats in the catalogue, plus the customisable version through orthogonal or diagonal cuts.

The series is inspired by the contemporary concepts of practicality, functionality and adaptability. It is proposed as a streamlined collection, made up of a floor-mounted toilet and bidet, plus a 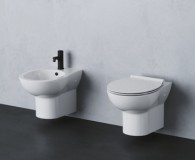 The series is inspired by the contemporary concepts of practicality, functionality and adaptability. It is proposed as a streamlined collection, made up of a floor-mounted toilet and bidet, plus a 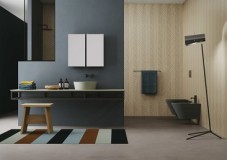 The collection reveals a well-defined aesthetic matrix, based in this particular case on the re-elaboration of the geometric shape of the cone. The washbasins all have a sculptural character of immediate appeal. 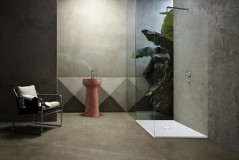 The floor-mounted washbasin in terracotta designed by Angeletti Ruzza Design. This is a tribute to an ancient material that evokes rituals linked to the theme of the cup or the amphora 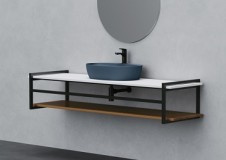 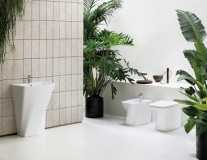 The personal interpretation of Daniel Libeskind and comes close to the idea of sculpture, expressed through the revisitation of the principles of neoclassical aesthetics. 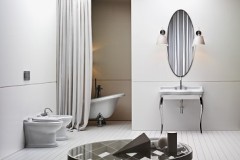 The series that the architect Marisa Grifone has dedicated to the bathroom environment of classical taste is inspired by the past. The timeless lines and comfortable proportions. 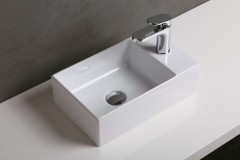 Truly unique pieces within the bathroom environment, they are designed to customise the washbasin area through an articulated selection of surface-mounted basins. 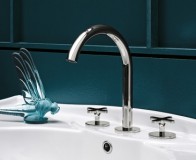 It is a collection of taps and fittings with an essential design created by Angeletti Ruzza Design as a complement to the ceramic production of the brand. 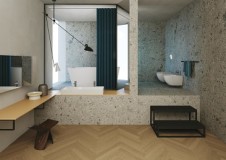 The collection of made to measure shelves connects to the Bespoke theme proposed as a dynamic bathroom furnishing system. Characterised by a reduced thickness of only 2 cm. 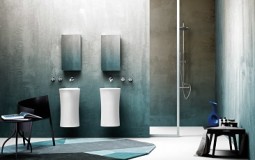 Inspired by the image of a trunk is the handwasher designed by Giovanni Levanti. A unique piece in shape of trunk. 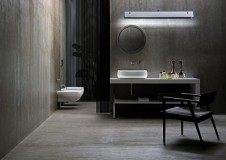 The series, designed by the Angeletti Ruzza Design duo, is inspired by fluid forms that give life to objects that are both harmonious and functional. 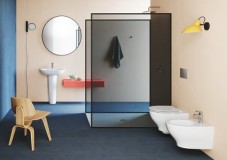 As the name suggests, it is a collection that lends itself to meeting the demands of a variegated and enlarged public. Its extreme functionality makes the series suitable for domestic and commercial uses. 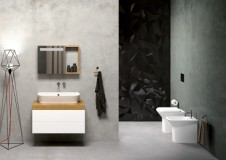 Characterised by a line in cantilever fashion that evokes the bow of a ship, it is a series of sanitary fixtures and washbasins with a dynamic and unprecedented design. 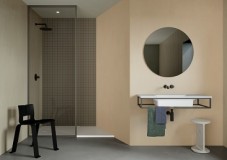 Square lines, minimum peripheral edge and the 3.5 cm thickness distinguish the minimal aesthetics of the series. Shower tray made of a single body in order to eliminate any possible ceramic defects. 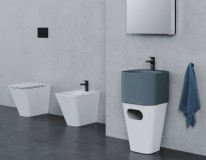 Bathroom environment a novel type of product that transforms the volume under the basin into a versatile basket container in lacquered polyurethane. 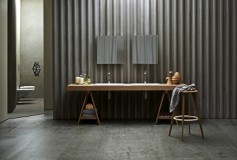 The theme of thinness successfully joins the world of ceramic sanitary fixtures. Serie of sanitary equipments and washbasin in matt effect and minimalist look. 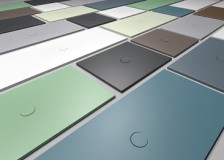 Shower tray based on dimensional customisation through made to measure cutting, free of edges and very thin: 2-3 cm and on the availability of a palette of warm colours. 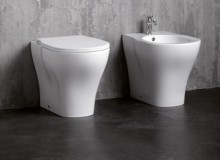 It was born from the need of a line of extra-large sanitary fixtures to dedicate to very spacious bathroom environments. Serie of toilets and bidets that is 30% larger and more comfortable.

Agency Cool Interior s.r.o. is a young and dynamic company, strengthened by an important experience on the international market. Our aim is to promote commercial partners, distributing tiles and paving, mosaics, sanitary, bathroom fittings, taps, accessories and profiles.